One of the major factors which contributed to the ignition of the dispute was the dire circumstances in which the city's poor lived. In 1913, one third of Dublin's population lived in slums. 30,000 families lived in 15,000 tenements. An estimated four million pledges were taken in pawnbrokers every year. The infant mortality rate amongst the poor was 142 per 1,000 births, which was very high for a European nation. The situation was made considerably worse by the high rate of disease in the slums, which was the result of a lack of health care and cramped living conditions, among other things. The most prevalent disease in the Dublin slums at this time was tuberculosis (TB), which spread through tenements very quickly and caused many deaths amongst the poor. A report published in 1912 claimed that TB-related deaths in Ireland were fifty percent higher than in England or Scotland, and that the vast majority of TB-related deaths in Ireland occurred amongst the poorer classes.

Poverty was perpetuated in Dublin by the lack of occupational opportunities for unskilled workers. Prior to the advent of trade unionism in Ireland, unskilled workers lacked any form of representation. Furthermore, there were many more unskilled labourers in Dublin than there were jobs for them. Thus unskilled workers often had to compete with one another for work on a daily basis, the job generally going to whoever agreed to work for the lowest wages.


James Larkin and the formation of the ITGWU

James Larkin, the main protagonist on the side of the workers in the dispute, had a history within the trade union movement. His first experience with trade unionism in Ireland had been in 1907 when he was sent to Belfast as local leader of the British-based National Union of Dock
Labourers (NUDL) after working as a docker in Liverpool. While in Belfast, Larkin organized a strike of dock and transport workers. It was also in Belfast that Larkin developed his tactic of the sympathetic strike, whereby workers who were not directly involved in an industrial dispute with employers would go on strike in support of other workers who were. The Belfast strike was moderately successful and boosted Larkin's standing amongst Irish workers. However, his tactics were highly controversial and as a result Larkin was transferred to Dublin. Unskilled workers in Dublin were very much at the mercy of their employers. Employers who suspected workers of trying to organize could "blacklist" them, practically destroying any chance of future employment. Nevertheless, Larkin set about trying to organize the unskilled workers of Dublin. This was a cause of concern for the NUDL, who were reluctant to engage in a full-scale industrial dispute with Dublin employers. As a result Larkin was suspended from the NUDL in 1908. Larkin then decided to leave the NUDL and set up his own union, the Irish Transport and General Workers' Union (ITGWU).

The ITGWU was the first Irish trade union to cater for both skilled and unskilled workers. In the first few months after its establishment it quickly gained popularity, and soon it had spread to other Irish cities. The ITGWU was used as a vehicle for Larkin's syndicalist views. Larkin believed in the bringing about of a socialist revolution by way of the establishment of trade unions and the calling of general strikes. After initially losing several strikes between 1908 and 1910, the ITGWU became more successful after 1911, winning several strikes involving carters and railway workers. Between 1911 and 1913, membership of the ITGWU rose from 4,000 to 10,000. This trend did not go unnoticed by employers, who soon became alarmed by the rise in popularity of the new trade union.

Larkin had also learned much from the progress and results of the Tonypandy Riots and the 1911 Liverpool general transport strike. 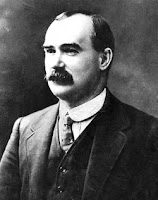 was James Connolly, Edinburgh-born of Irish descent. Connolly, like Larkin, was a talented orator and became known for his speeches on the streets of Dublin, in which he made a case not only for socialism, but also for Irish nationalism. In 1896, Connolly established the Irish Socialist Republican Party, along with the newspaper The Workers' Republic. In 1910 Connolly became involved with the ITGWU, and was appointed as its Belfast organizer in 1911. In 1912 Connolly and Larkin formed the Irish Labour Party, which was intended to represent the workers in the imminent Home Rule Bill debate in Parliament (which, due to the start of World War I was suspended for one year and then indefinitely after the rise of militant nationalism following the 1916 Rising, so it never materialized).


William Martin Murphy and the employers

Foremost among the employers opposed to trade unionism in Ireland was William Martin Murphy. Murphy was a highly successful businessman from Co. Cork. In 1913, he was chairman of the Dublin United Tramway Company and owner of Clery's department store and the Imperial Hotel. He also controlled the Irish Independent, Evening Herald and Irish Catholic newspapers and was a major shareholder in the B&I Line. Murphy was also a prominent nationalist and a former Home Rule MP in Westminster. He was known as a kind and charitable man in his private life. He was regarded as a good employer and his workers received fair wages. Conditions were poor. Employees were forced to work up to 17 hours a day and a harsh discipline regime and informer culture was pursued. Murphy was vehemently opposed to trade unions which he saw as an attempt to impede on his business, and in particular he was opposed to Larkin, whom he saw as a dangerous revolutionary. In July 1913, Murphy presided over a meeting of 300 employers, at which a collective response to the rise of trade unionism was agreed upon. Murphy and the employers were determined not to allow the ITGWU to unionize the Dublin workforce. On 15 August Murphy dismissed forty workers he suspected of ITGWU membership, followed by another 300 over the next week.

On 26 August, workers of the Dublin tram system's Dublin United Tramways Company officially went on strike. Larkin timed the strike to take place in the middle of the Dublin Horse Show held by the Royal Dublin Society, when the inconvenience caused would be greatest and Murphy's business worst affected. At a pre-arranged time, the tram drivers and conductors literally walked off the trams, leaving them unattended. Led by Murphy, over four hundred of the city's employers retaliated by requiring their workers to sign a pledge not to be a member of the ITGWU and not to engage in sympathetic strikes. 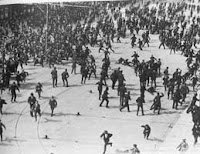 The resulting industrial dispute was the most severe in Ireland's history. Employers in Dublin
engaged in a lockout of their workers, employing blackleg labour from Britain and elsewhere in Ireland. Dublin's workers, amongst the poorest in the United Kingdom, were forced to survive on £150,000 from the Trades Union Congress (TUC) and other sources in Ireland, doled out dutifully by the ITGWU. A scheme whereby the children of Irish strikers would be temporarily looked after by British trade unionists was blocked by the Roman Catholic Church, who protested that Catholic children would be subject to Protestant or atheist influences when in Britain. The Church supported the employers during the dispute, condemning Larkin as a socialist revolutionary.

Notably, Guinness, the largest employer and biggest exporter in Dublin, refused to lock out its workforce. It had a policy against sympathetic strikes; while it refused to join Murphy's group it sent £500 to the employers' fund. In turn, it expected its workers not to strike in sympathy, and six who did were dismissed. 400 of its staff were already ITGWU members, so it had a working relationship with the union. Larkin appealed to have the six reinstated, but without success.

The strikers used mass pickets and intimidation against strike breakers and the Dublin Metropolitan Police in turn baton charged worker's rallies. The DMP's attack on a union rally on Sackville Street (now known as O'Connell Street) in August 1913 caused the deaths of two workers, James Nolan and John Byrne, and hundreds more were injured. This was provoked by the illegal appearance of James Larkin to speak out for the workers. It is still known in the Irish Labour movement as "Bloody Sunday" (despite two subsequent days in 20th century Ireland that are also described in this way). Another worker, Alice Brady, was later shot dead by a strike breaker while bringing home a food parcel from the union office while Michael Byrne, an ITGWU official from Dún Laoghaire died shortly after being tortured in a police cell. In response, Larkin, his deputy James Connolly, and ex-British Army Captain Jack White formed a worker's militia named the Irish Citizen Army to protect workers' demonstrations.

For seven months the lockout affected tens of thousands of Dublin's workers and their families, with Larkin portrayed as the villain by Murphy's three main newspapers, the Irish Independent, the Sunday Independent, and the Evening Herald. Other leaders in the ITGWU at the time were James Connolly and William X. O'Brien, while influential figures such as Patrick Pearse, Countess Markievicz and William Butler Yeats supported the workers in the generally anti-Larkin media.


End of the Lockout

The lockout eventually concluded in early 1914 when the calls for a sympathetic strike in Britain from Larkin and Connolly were rejected by the TUC. Most workers, many of whom were on the brink of starvation, went back to work and signed pledges not to join a union. The ITGWU was badly damaged by its defeat in the Lockout, and was further hit by the departure of Larkin to the United States in 1914 and the execution of Connolly for his part in the nationalist Easter Rising in 1916. However, the union was re-built by William O'Brien and Thomas Johnson and by 1919 its membership had surpassed that of 1913.

Although the actions of the ITGWU and the smaller UBLU were unsuccessful in achieving substantially better pay and conditions for the workers, they marked a watershed in Irish labour history. The principle of union action and workers' solidarity had been firmly established; no future employer would ever try to "break" a union in the way that Murphy attempted with the ITGWU. The lockout itself had been damaging to commercial businesses in Dublin, with many forced to declare bankruptcy.